After the IDRS evening concerts, we would thread our way home between high-walled gardens perfumed with night jasmine, climbing the steep, narrow, decorative cobbled streets of the Albaicín, the Old Town of the Muslim Nasrid Kingdom; Iike Česky Krumlov, a stunning World Heritage site.

Flamenco singing drifting on the sultry evening air and moonlit gIimpses of its exotic Alhambra & Generalife Palaces float above this wonderful City of Pomegranates, all bathed in moonlight.

The city's streets are even Iined with thousands of cast iron traffic boIlards in the form of pomegranates.

We even found them on the drainpipes. I enjoyed a pomegranate ice cream too. JP

For my taste, IDRS 2018 against this intoxicating backdrop

was bound to be the success it evidently was.

From the lavish Opening Day post-concert evening buffet banquet for alI, on the elegant. poplar-lined terrace

just up from the Manuel de Falla concert hall, where Judy

was very excited to talk for the first time to Pedro Cosme Díaz – Cor Anglais with the New York Metropolitan Opera Orchestra,

Yes! I indulged in some serious fan-enthusiastic star-orbiting... and talked to him about his recently published edition of Donizetti's Concertino in F for Cor Anglais published by Presser after his research in the Bologna Library studying the original score....

and it was good to catch up with others such as Gordon Hunt, Simon Emes, Celia Craig, Alison Green, Jan Knight, Graham Salter, Renaud Patalowski, T W Howarth folk and Ian Crowther.

To the sunset terrace of the Manuel de Falla concert hall with its fabulous views of the New Town and Sierra Nevada in the far distance,

Through to the Guinness Book of Records "record - breaking" - Biggest Double Reed Ensemble EVER (did I mention that Judy was standing next to Pedro for this performance?? Happy memories Judy!) ....

Yes happy memories – when I mentioned to José Antonio Massmano later how amazing it was that there were 99 Cor Anglais players – he retorted “but there were 100!” – which is true as José was conducting!

and this one for another section of the concert

To say nothing for the superb lectures and displays of performance, instrument and reed making from the other professional participants who came from all corners of the world.

AlI in alI, a supreme achievement by the conference organisers. Muchas Gracias!

Plus we cannot thank our ardent supporters at Marigaux enough, not least for lavishing such attentive care on my lovely 901 instrument.

Why oh why then, I hear you ask, does IDRS not more regularly showcase one of oboe history's

Well, you can all relax, because IDRS/Granada did, with us: the Lonarc Oboe Trio from London -

Krommer, Anton Vranitzky and Austrian Franz Pössinger provide a veritable ' jewel - laden crown’ , and one soley for us oboists.

Having had the chance to study and perform these works over the past few decades, to our mind these trios really deserve a much higher profile – and we hope that our performances will help engage a wider audience and inspire a greater similar understanding and appreciation.

Especially considering that they also represent the first virtuosic writing for the cor anglais.

We'd seen 18th century manuscript copies of these parts earlier in the summer at the Česky Krumlov castle archive in Southern Bohemia when we performed in their chamber music festival on July 4th.

Once home again in London after this July 4th concert we worked through the 2018 heatwave and against the clock to prepare new urtext scores and parts for our IDRS programme.

We had our hearts set on sharing our painstaking editorial work live on stage in Granada.

It transforms how you play because handwritten originals subliminally suggest much, much more than ‘blank’ freshly - minted modern printings.

Harmonic analysis was another key ingredient for our IDRS prep. We wanted to ensure we were not only respecting what these composers actually wrote dynamics, articulations,

only a keen sense of Early Classical period harmonic structure can reveal.

As we rehearsed, it was gratifying to feel a new freshness, life and colour returning to this lovely music. Our arduous investigative clean-up work was paying off.

We owe a huge debt of gratitude to the invaluable work done in the 1970’s and '80s,by the folk who first edited and published this oboe trio repertoire from the 18th oentury. Edition Kneusslin of Basel among others put these treasures of oboe heritage back on the concert stage. Now we want to finish this project,and publish as much of this important legacy as we can lay our hands on, using our experience as performers, creating new ‘cleaner’ correctly articulated editions of both scores and parts.

We've discovered 2 if not 3 new previously unpublished trios for instance – so watch this space.

These LOTP editions will make it easier for our feIlow oboists around the world to enjoy playing this precious music to the highest standard on the concertpodium. IDRS18 in Granada wasin so many ways the perfect setting in which to realise the beginning of this vision.

Last on our programme, we gave the Spanish première of our good friend James Horan's

Variations Humoresques on Carnival of Venice (1995)

It's definitely got the wow-factor.

And do please talk to your audience, give them a Iittle bit of you. I did this - told some joke

about needing a beer to quench our thirst in between movements for instance.

Granada is quite high (2,421ft) and we found that we were all having to stop to drink water between each movement. I was sure that the Teimer brothers would surely have been drinking a nice cool lager during their performances. As we do after our performances...

Granada, even in late August, is wondrously hot and playing oboe trios is already thirsty work. Chatting also gave me a little breather; those first oboe parts are quite a marathon.

Anyway, audiences always love being spoken to: it connects. And to my mind this is what performing is all about.

We are looking forward to being able to let you hear this concert once the recording becomes available in 2019. We are very grateful for the kind comments listed below.

'The sound of an oboe trio is so unique, sonorous: a blend like no other. In the capable hands of the Lonarc Oboe Trio, Joseph Sanders, Owen Dennis and Judy Proctor, the intimacy and joy of this type of chamber music is truly realised. The players led by the outstanding Joseph Sanders, have such familiarity with each other and the music that they are able to take risks, to seamlessly blend and to introduce new repertoire to eager ears. I really enjoyed this concert (in Granada) and especially the wonderfully funny and virtuosic variations by their ex-member James Horan, a tribute to the quality of this ensemble, and to their pioneering attitude.’

‘It was an absolute pleasure to be able to listen to the Lonarc Oboe Trio in Granada, Spain, during the International Double Reed Society 2018 Conference. We were treated to an interesting and inspiring programme for oboe trio and the witty and clever Variations on `Carnival of Venice´ by James Horan were a complete success. Thank you for participating in this international event. You were real stars!’

‘Hearing the Lonarc Oboe Trio in concert reminded me of the excitement and happiness that I first discovered while playing chamber music as a student. Introductions tinged with humour make these pieces immediately accessible and relevant in our time. The quality is unquestionable and the entire experience in their company, utterly delightful.’

‘I have been following the Lonarc oboe trio for many years and it was an absolute thrill for me to see them playing during the IDRS convention in Granada last Summer.

I was astonished not only by the quality of their music, their skills and performance which require a lot of… ‘doigté’, but pleased also by the humour the audience could perceive in the way the Ensemble performed and directed their pieces. When music is played in a serious way but not seriously, it gives back an outstanding level of accomplishment. Thank you so much for the enthusiasm !’ Renaud Patalowski Marigaux SAS www.marigaux.com

The Lonarc Oboe Trio is committed to recording all the original eighteenth-century Viennese/Bohemian oboe trios of the period. In this concert they gave us a fascinating sample of the works they have already researched.

Franz Alexander Possinger (1767-1827) and Johann Wenth (1745-1801) were perhaps not great composers, but thorough professionals in the company of greatness (Mozart, Haydn, and Beethoven), providing music for court orchestras in Bohemia and Vienna; and in passing they Wenth invented the musical ensemble, the oboe trio.

Possinger's Trio in F major combines virtuosity with wit and inventiveness that makes diverting listening. The players' delicate phrasing and superb ensemble no doubt owed much to the cor anglais, just as the music itself owes a debt to the brilliant Teimer family - father and three sons- the first virtuoso players of that instrument. The subtle variations in dynamics were especially admirable in Wenth's Divertimento in B flat, where moods of melancholy were well contrasted with much humour.

The Trio's former member James Horan (b.1966) continued this humor in his Variations Humoresques on Carnival of Venice (1995) written specially for the group. This music requires the highest levels of technique: no trouble for the Lonarcs. Ironical, perhaps, that the original audiences probably only heard it as background - if at all - while they tucked into theirbanquets!

Oboe Classics has just released an album by the Lonarc Oboe Trio (for downloading or streaming) of trios by Johann Wenth. It is available on iTunes and Spotify, and all details can be found at www.oboeclassics.com/digital

We worked hard, we played hard.

After our concert, we adjourned to celebrate at a pavement restaurant with bottles of cava and a delicious Andalusian meal.

Owen shared photos of his very recent proposal to his lovely lady and congratulations in order as she said yes!...on a mountain top in the Lake District, just two days before leaving for Granada Owen’s birthday is 28th August, and how we laughed together at hilarious misspellings in the menu: “Owen, were they really serving testicles?” for instance.

After savouring a vivid green and surprisingly enjoyable digestif served ‘gratis’, Owen then left for London to complete his master's dissertation on artificial intelligence, leaving Judy and I to

relish a few more balmy evenings in the jasmine scented Albaicín, chats with oboe friends from around the world and enjoying the amazing IDRS concerts, e.g. Sophie Dartigalongue playing André Jolivet and Malte Refardt's epically funky bassoon solo by Marcus Wesselmann. Pedro Díaz's deeply intelligent masterclass on the cor anglais solo from Tristan was another highlight. As were the recitals by Celia Craig, Sebastien Giot and Katherine Needleman amongst the many scheduled and the few that I was able to attend. 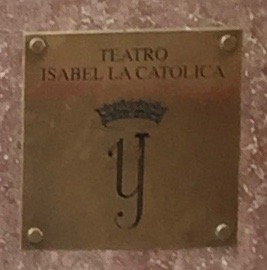 On the last day, Judy and I spent unforgettable hours in the exquisite Alhambra Palace & their divine gardens. I've long wanted to go. Thanks, Judy for miraculously getting me a last minute ticket online Saturday midnight, despite it being " sold out". You're a star.

Our rehearsal on the evening of 29th August was at the delightful local 'Real Conservatorio Superior de Musica "Victoria Eugenia" - that had this courtyard full of plants. How civilised is that?

Mike Britton of TW Howarth and another Cor Anglais player... received a much deserved Honorary IDRS award this summer having attended the past 30 or so conferences

The story of Joe's hat.

Joe had scoured the small shops on the streets leading up to the Albacín and had chosen this lovely hat. On the Thursday evening he realised that he had lost it. On Friday when returning to the Palacio de Congresos to meet up with Marigaux he was sitting at the entrance where he had been sitting waiting for me the previous day, and saw his hat on the side. Exactly where he had left it on Thursday afternoon....